What is Logon Trigger?

Logon Triggers are special kind of Stored Procedure or an operation that gets executed automatically in response to a LOGON event. They get executed only after the successful authentication but before the user session is established. If authentication fails the logon triggers will not be fired.

Caution! : Logon Triggers are very useful feature, but a small mistake in the Logon Trigger may cause database server un-accessible to any user including SA user. For example in a Logon trigger you are referring to a non existent table or database will allow you to create it. But once it is created then no one will be able to connect to the server as Logon trigger errors out. So it is best advised to check whether you are able to establish a Dedicated Administrator Connection (DAC) with SQL Server Management Studio. Because in case you have created a wrong trigger and not able to to connect, then DAC connection comes for your rescue. As the DAC connection will not trigger the LOGON trigger execution and you will be able to connect to Sql Server and after connecting disable the incorrect trigger.

Below are the some of the usecase scenarios where LOGON triggers will be usefull:

Create a login TestUser by executing the following script: 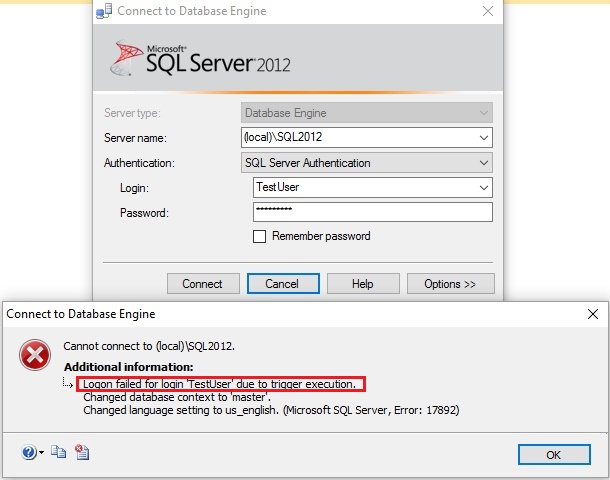 In case of Logon Triggers the PRINT statement result in the trigger will be logged to the Sql Server Error Log. Let us login as different user and check whether PRINT message in the Logon trigger is logged into the Error Log during the above failure attempt:

EXAMPLE 2: This example Logon Trigger blocks a user from establishing more than two user sessions at any given point of time

Now try to establish more than two concurrent sessions for the TestUser:

From the above image we can see that the TestUser was able to have two concurrent new query sessions, but the attempt to open the third session is blocked by the trigger.