Following are the some of the new features of the Sql Server 2016 which I have blogged. Click on the feature name to know it in detail with extensive list of examples:

In Sql Server 2016 we can write a statement like below to drop a Stored Procedure if exists.

In Sql Server 2016 we can write a statement like below to drop a Table if exists.

Result of this function is a table with one column with column name as value.

EXAMPLE: This example shows how we can use STRING_SPLIT function to splits the comma separated string.

COMPRESS and DECOMPRESS are the new built in functions introduced in Sql Server 2016.

DECOMPRESS function decompresses the compressed input binary data using the GZIP algorithm and returns the binary data of type Varbinary(max). We need to explicitly cast the output to the desired data type.

Let us understand these functions with examples:

Let us cast the result of the DECOMPRESS function to Varchar type by the following statement.

In .Net we have Session object which provides a mechanism to store and retrieve values for a user as user navigates ASP.NET pages in a Web application for that session. With Sql Server 2016 we are getting the similar feature in Sql Server, where we can store multiple key and value pairs which are accessible throughout that session. The key and value pairs can be set by the sp_set_session_context system stored procedure and these set values can be retrieved one at a time by using the SESSION_CONTEXT built in function.

EXAMPLE: This example demonstrates how we can set the session context key named EmployeeId with it’s value and retrieving this set keys value.

Live Query Statistics is one of the new feature introduced in Sql Server 2016, it basically provides the real-time live execution plan of an active running query to the Developer/DBA.

To get the live query execution plan, just like Actual Execution plan option we need to select the Include Live Query Statistics option as shown in the below image before executing the query 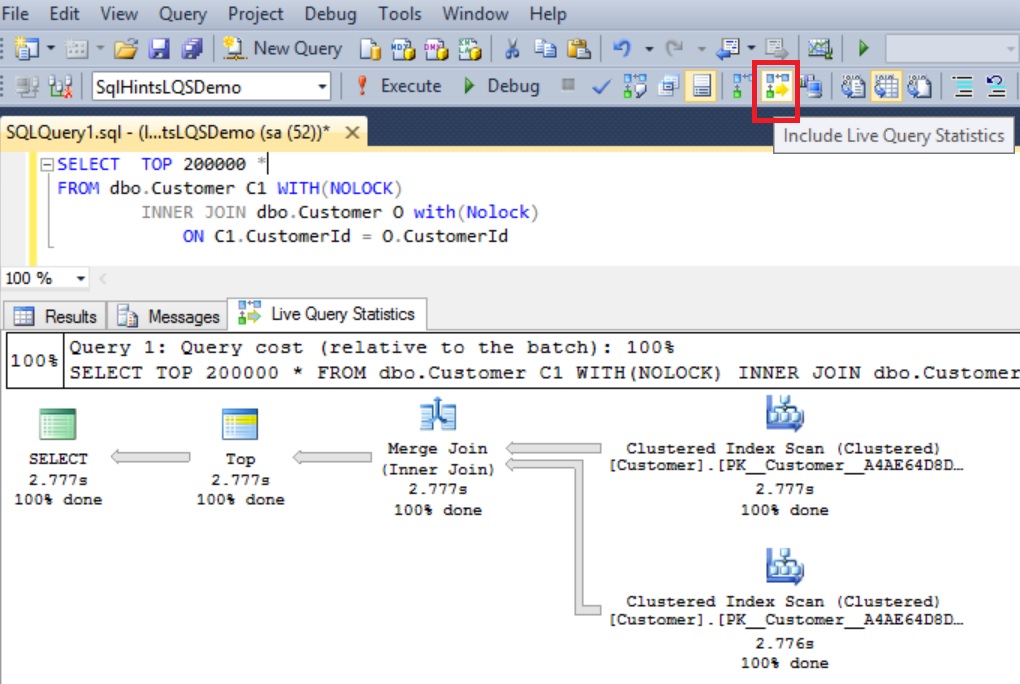 *Double click on the image to get the enlarged view

Native JSON (Java Script Object Notation) support is one of the new feature that is coming with Sql Server 2016.

JSON implementation in Sql server is on the similar lines as that of XML. One major difference is: JSON doesn’t have native JSON data type like the XML data type. We can store JSON data in regular NVARCHAR/VARCHAR column.

Below are the main JSON features introduced in Sql Server 2016. Click on the link to understand each of these features with an extensive list of examples.

With regular tables we can only know the current/latest state of the data, we will not be able to see the past state of the updated or deleted records. For regular tables if we need to keep track of the history developer need to create triggers and store the data in separate table there is no built in support for it. But with Temporal Tables Sql Server provides the built-in support for tracking the full history of the data and also provides the temporal querying construct FOR SYSTEM_TIME to query historic data at any point in time or for a period of time. Because of this built in support by the database engine to track the history of the data, Temporal Tables are referred as system-versioned temporal tables/system versioned tables.

Row level security is one of the new feature introduced in Sql Server 2016, it provides a mechanism to control row level read and write access based on the user’s context data like identity, role/group membership, session/connection specific information (I.e. like CONTEXT_INFO(), SESSION_CONTEXT etc) etc.

The logic to control the access to table rows resides in the database and it is transparent to the application or user who is executing the query. For example a database user executing a query SELECT * FROM Customers may feel that he has complete access to the Customers table as this query is returning the result without any exception, but with row level security in-place we can make the DataBase engine internally change the query something like for example: SELECT * FROM Customers Where AccountManager = USER_NAME(). 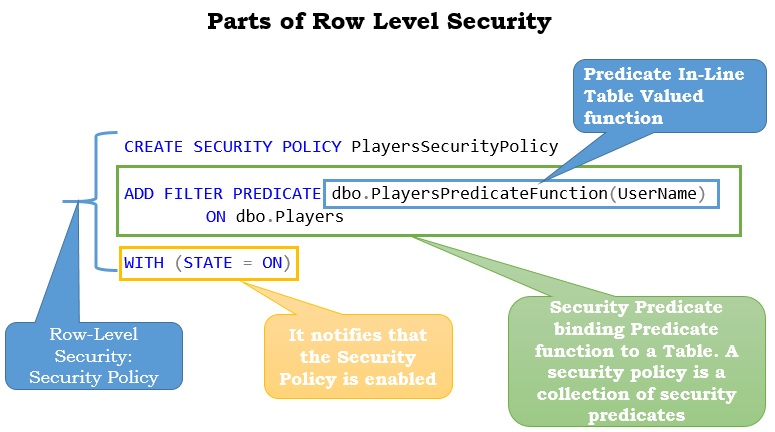 Following are the three main parts of a Row-Level Security

There are two types of security predicates

Dynamic data masking is one of the new Security Feature introduced in Sql Server 2016. It provides a mechanism to obfuscate or mask the data from non-privileged users. And the users with sufficient permission will have complete access to the actual or un-masked data.

Traditionally, if we see the application layer takes care of masking the data and displaying it. For example: from database layer we will get a clear SSN number like 123-321-4567, but the application will mask and display it to the user as XXX-XXX-4567. With dynamic data masking from database layer only we can return the query result with masked data if user doesn’t have sufficient permission to view the actual/Unmasked data.

Dynamic data masking functions/rule can be defined on the table columns for which we need the masked out-put in the query result. It doesn’t change the actual value stored in the column. Masking function is applied on the query result just before returning the data, if user doesn’t have the enough permission to get the un-masked data. But user with db-owner or UNMASK permission will get the un-masked data in the query result for the masked columns. Masked out-put will be of the same data type as the column data type, in that way we can readily use this feature without really needing changes to the application layer.

Many a time we come across a scenario where suddenly in production without any release or changes some query which was working perfectly alright till yesterday is taking too long to execute or consuming lot of resources or timing out.

Most of the times such issue are related to execution plan change (commonly referred as Plan Regression). Till yesterday the query was running fine as it was running with good cached execution plan and today a bad plan is generated and cached. Because of this bad cached plan the query which was executing perfectly alright suddenly starts misbehaving.

To identify and fix such performance problems due to the execution plan change the Query Store feature introduced in Sql Server 2016 will be very handy.

Query Store basically captures and stores the history of query execution plans and its performance data. And provides the facility to force the old execution plan if the new execution plan generated was not performing well.

For a Query Store feature enabled database we can see the Query Store folder in the SSMS with various options like Regressed Queries, Top Resource Consuming Queries etc as shown in the below image: 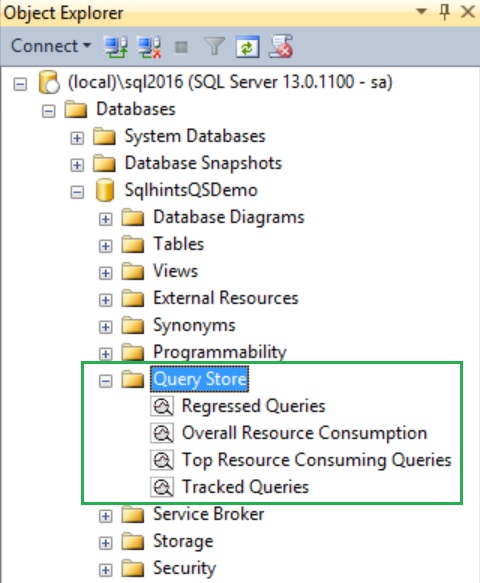 As shown in the below image Query Store gives an option to view and compare various execution plans for a query and force the execution plan for the future execution of the query. 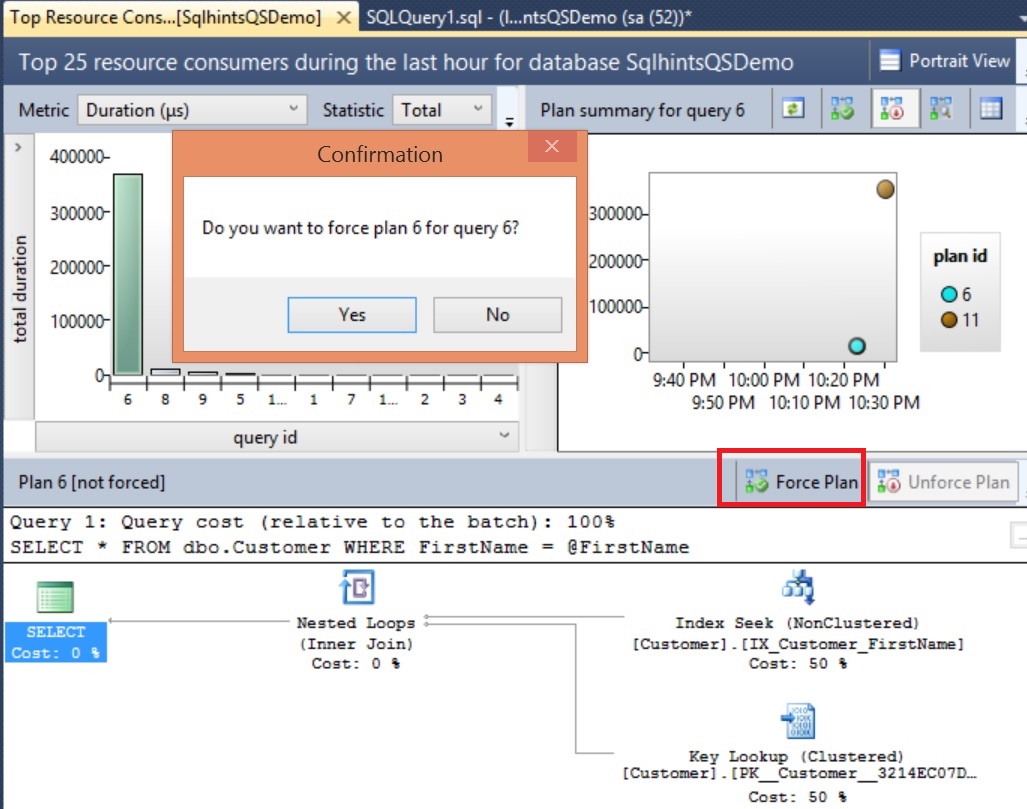 In the versions of Sql Server prior to Sql Server 2016 by default first 8 pages for the tables were from a mixed extent at one page at a time and subsequent pages were from an uniform extent. Microsoft in the versions of Sql Server prior to 2016 provided an option to override this behavior by means of Trace Flag 1118. If this trace flag is enabled, the first 8 data pages for the tables were also from Uniform Extent instead of Mixed Extent. This flag was helpful to avoid the resource contention issues, especially in the TempDB in the scenario’s where huge number of temp tables were created. 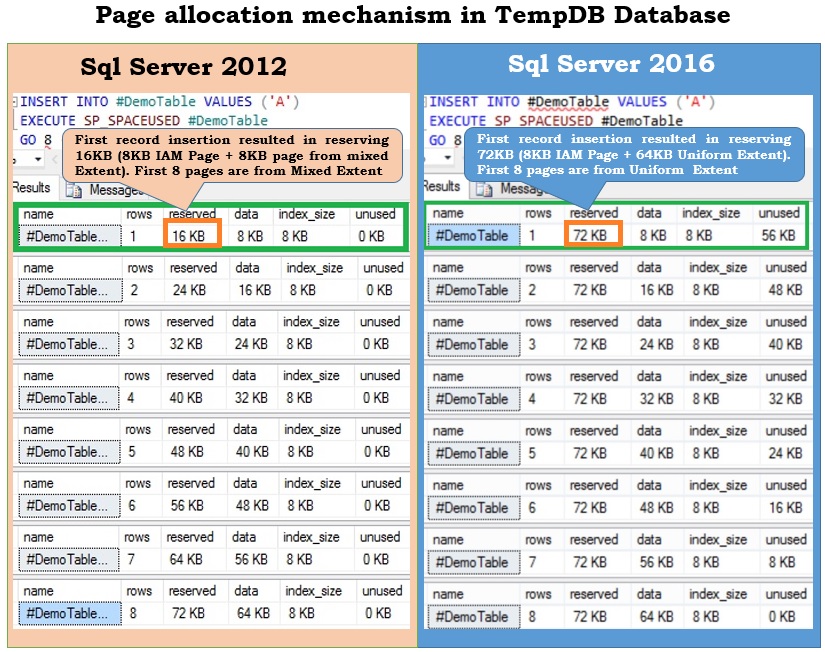 Example: Below example demonstrates how DATEDIFF and DATEDIF_BIG functions behave differently when the milliseconds difference between two dates is greater than the INT max (i.e. 2,147,483,647) value.

Msg 535, Level 16, State 0, Line 1
The datediff function resulted in an overflow. The number of dateparts separating two date/time instances is too large. Try to use datediff with a less precise datepart.

So, if we know that sometime the difference between two dates is going to cross the INT max value then we have to use the DATEDIFF_BIG function

Following are the some of the new features of the Sql Server 2016 which I have blogged. Click on the feature name to know it in detail with extensive examples: